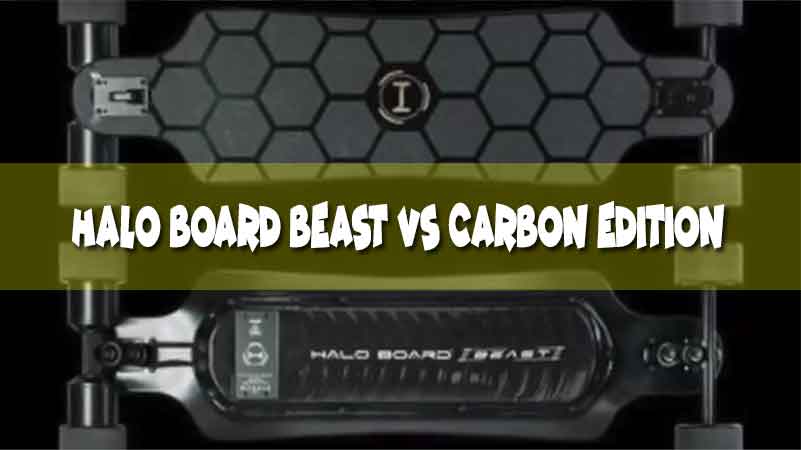 Halo Board BEAST vs CARBON Edition – I’m going to show you the difference between the halo board second-generation carbon edition to their latest beast edition which I’ve just received now. I’m a spec junkie, I like to see all the numbers, so I can compare, normally. But sometimes, I need to visually, see, and feel a comparison, and that’s what I’m going to be doing for you today. I’m so in love with this board and brand, doing a comparison was just too good to pass up. Now, I’ve owned the second-gen board for going on four years, and I’m ready for an upgrade both in power and ride quality.

Halo Board BEAST vs CARBON Edition

Halo Board BEAST vs CARBON Edition

Doing a side-by-side comparison, the be shown at the bottom it looks longer as a whole. It is slightly but the longer wheelbase gives it that illusion. Here you can definitely notice, the overall girth difference the wheel diameter is noticeably larger which I was excited about to better handle our immaculate maintained southern California sidewalks and roadways. The wheelbase is also wider on the beast.

Showing its large direct-drive motor hubs, the second gens hubs are built into the wheels mounted on traditional style trucks. The beast uses double kingpin-style trucks, giving it insane articulation. The beast exposed style motors allow for more wheel options. Unlike, the second-gen which you’re stuck with only one. And by the way, these are the third set of wheels I’ve gone through on this board.

The thin sidewall doesn’t allow for much cushioning effect, replacing them isn’t really a big deal. As the fit and finish of the components make servicing a joy. Then again, I am a mechanic. Because of the overall design of the second-gen, the articulation is limited, the turning radius is pretty large, taking up almost an entire normal residential street width just to make a turn. I have the settings on the trucks maxed out already. As you can see, where the tire has kissed the board. We’re right, where my thumb is the beast turning radius is literally half which is impressive, considering the longer wheelbase.

Now comparing the remotes. I really enjoyed the original generation twos remote after a couple of drops, and just overall use it. It just kind of wore out, and I did order a new one, and they sent me the updated version. It’s really nice and simple. It feels great in the hand, but I wish they would have kept the little LED as I do a lot of night riding after work. And it does come in handy.

Going to the beast remote. It’s like a wet dream, it just feels amazing in the hand with a little finger hole, and all that just feels like it’s part of you until you have gloves or wrist guards then. It’s terrible also, worth mentioning I keep accidentally hitting the power mode button which can be dangerous, and just overall annoying. This board does have three power modes, one being the lowest speed, and three being well, you’ve guessed it the beast mode. Because the torque is so powerful, right off the bat in every mode. The accelerator thumb-wheel makes it hard to kind of feather. The initial take-off, it’s kind of like when you accidentally pop a clutch in your car, and you get jolted forward. It does take some getting used to.

Now, a little acceleration test side by side, you can see the difference from full stop to full speed. The beast is almost instantaneous to full speed whereas the second-gen has to take a bit longer to get there. And by the way, they both are fully charged, and to be fair, my second-gen is probably at least 10 percent less capable from when it was brand new. This little incline at my workplace. You can see the second-gen takes a bit to get going compared to the beast. When on the beast, I had to let off the throttle twice to prevent getting left behind, especially, while filming and holding the phone and everything made a little difficult as I wasn’t used to all that power yet. It definitely feels like double the torque.

The brakes are equally impressive. If you’ve owned the second-gen then you know how rigid this board is. I mean it’s pretty much completely carbon fiber, and it’s noisy. I mean people can hear me coming to a block away literally, especially on the sidewalks. You know with all the cracks clap clap clap clack, the beast is so much quieter.

The difference between the two, you can see, the second-gen is a lot lighter and it’s easier to carry, especially, with its ingenious and integrated handle. But unlike the second-gen, you are able to roll the beast around. The increased articulation of this board causes way less drama when running over things, like twigs, and going in and out of driveways compared to what I’m used to.

Okay now, before purchasing this board, I did get caught up in all the one-wheel hype. I purchased a one-wheel and I rode it all over for a good couple of weeks, went on a little road trip, and took it with me. Had a lot of fun, but the motor would momentarily cut out on me without warning, and it would just send me flying off the thing, and smacking right on the ground. So, to be honest, I’m just too scared to get back on a thing. I’ll probably end up selling it and that’s why I bought the beast. I can definitely see myself already becoming addicted to all this power. Right out of thumb tip probably what I’ll miss most about the older boards design compared to the new one is, its compactness and lighter sizing, and also the original remote. I really did enjoy that remote but that’s pretty much. It was a wonderful beginner electric board for me, and I’m really excited to grow into the beast and see what adventures we run into. 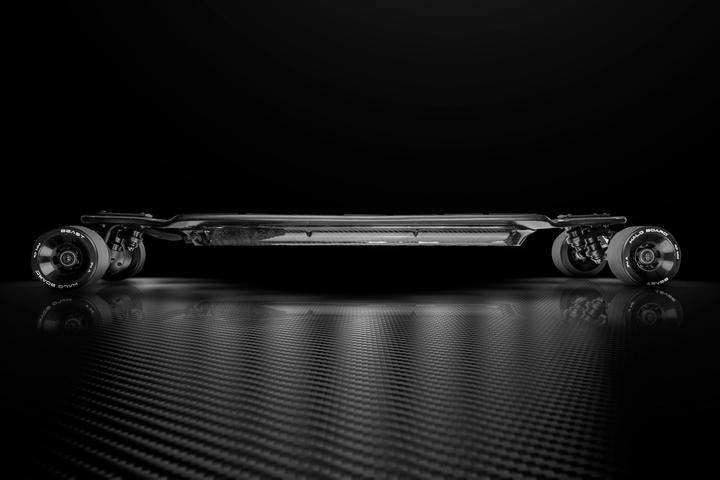